The SAGE University - Bhopal. The aim of establishing the university is to abridge the skill gap of the youth so that it is well equipped to deliver services as professionals or as entrepreneurs and contribute constructively to the economy of our country. SAGE university offers many courses in the various fields of learning.

The SAGE University - Indore. The aim of establishing the university is to abridge the skill gap of the youth so that it is well equipped to deliver services as professionals or as entrepreneurs and contribute constructively to the economy of our country. SAGE university offers many courses in the various fields of learning.

Sagar Institutes of Research & Technology established in 2003 with one engineering college. It imparts world class education in Engineering, Management, Pharmacy and Diploma. Sagar Group of Institutions-SIRT has 5 colleges known as SIRT, SIRTS, SIRTE, SIRT-P and SIRTS-P.

With the aim to provide world-class education Sage International School is providing education and morality to young brains. In 2018 SIS launched in Ayodhya Nagar and in 2019 the legacy forwarded to its second branch in Kolar Road. These are the first schools in Bhopal with all AC classrooms and labs and ERP App for parents to have a digital eye on their child.

Agrawal Power Private Limited was introduced in 2007. Now the company has become one of the leading company in engineering and Electrical Infrastructure. APPL is currently working in Madhya Pradesh, Chattisgarh and Maharastra. The company is committed to Rural Electrification as a part of its Corporate Social Responsibility.

We at My Sage Hospital know that hospital services are the nucleus of any hospital's offerings. Our every facility is carved by keeping the fundamental needs and wishes of the patients in mind to make My Sage Hospital a one-stop centre for everyone in need. We have distinguished departments for clinical administration and other services for determining conditions and for emergency services as well. 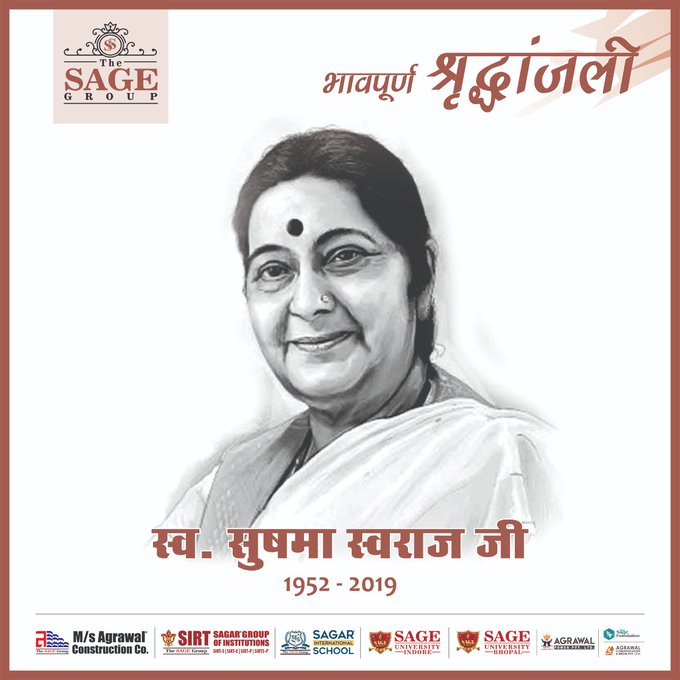 #SushmaSwaraj #RIPSushmaJi
"A glorious chapter in Indian politics comes
to an end."
We at The Sage Group pays tribute
to the woman who was a mother figure
to millions of Indians.
Rest in peace Sushma Swaraj.

Today News 18 Mp/Cg recognized 'The COVID Heroes"
and We are Proud that CMD The Sage Group and
Chancellor Sage University Indore and Bhopal Er. Sanjeev Agrawal
is amongst the few who helped thousands of people to fight these hard time.

is a parent firm of various companies such as Agrawal construction co.

, which includes 5 colleges and 2 schools in it.

.The SAGE was not built all of sudden, it took years, where one by one brick added to its foundation and then over the years Agrawal succeed to project

in front of the world. The SAGE owns a range of residential sites, with the name of
Due to these traits, he is touching all the glory and his paying back to society thinking lead him towards education where he decides to give the best gift to society and indeed there is nothing great than giving education to one. Finally, in 2003,

puts the foundation of its first educational institution SIRT (Sagar Institute of Research and Technology), being an engineer himself Agrawal choose to open an engineering college and give young power a platform to learn and prove themselves.

offers over 50 courses and till now over 50,000 students have enrolled themselves in the prestigious engineering institute of Bhopal. Later to that,

.
The whole purpose of education is to turn mirrors into windows, and Mr Sanjeev Agrawal understands it very well, which became the reason that he established a whole university in 2017 in Indore with the name

. The aim of establishing the university is to abridge the skill gap of the youth so that it is well equipped to deliver services as professionals or as entrepreneurs and contribute constructively to the economy of our country. SAGE UNIVERSITY offers many courses in the various field of learning such as engineering and technology, management, journalism and mass communication, law and many others
The powerful, visionary and enthusiastic entrepreneur refused to stop challenging his fate and sharp business mind, thus in 2007, along with his childhood friend Anupam Pandit, he inaugurated

.Sage International School (SIS) is among the top schools in Bhopal and also the most distinguished schools of Bhopal. It is a dream maker in the pursuit of excellence where the high academic expectations are fully met.